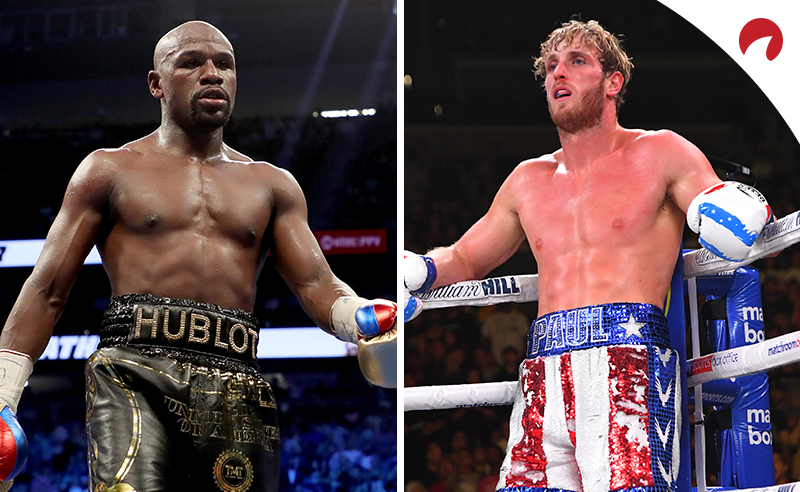 Arguably the greatest boxer of all time will be displaying his outstanding skills once again, as Floyd Mayweather Jr. will be taking on YouTube star Logan Paul in what is being coined a “super exhibition.” The fight was supposed to take place on February 20, however, it has been postponed due to “COVID and other things,” according to the Mayweather camp.

With a quick look at the Logan Paul vs Floyd Mayweather odds, it comes as no surprise that the 50-0 boxer, Mayweather, is a massive favorite and Paul, with his 22.6 million followers, is a huge underdog.

Of course, Paul was called out on social media after his brother Jake knocked out Nate Robinson in the co-main event of the Mike Tyson vs Roy Jones Jr. card. I will take a look at the Logan Paul vs Floyd Mayweather odds and provide a prediction for this fight below.

Online sportsbook Bovada has released the Logan Paul vs Floyd Mayweather odds and, not surprisingly, has listed Mayweather as a large -1400 favorite with Paul coming back as a +750 underdog. This means you would have to wager $1,400 to profit $100 with a Mayweather win, while a $100 bet on a Paul win would profit you $750.

Odds as of January 25 at Bovada

Unsure of what the Paul vs Mayweather odds mean? Check out our handy boxing betting guide to help you get in on the action.

Perhaps a feather in the cap for Paul is that he isn’t the biggest underdog ever against Floyd; Mayweather’s shortest odds were -3000 in a bout against Andre Berto. Paul has had one pro boxing match, in November 2019, when he lost a close split decision to KSI. So we have an 0-1 YouTube sensation up against a 50-0 boxer, which makes all the sense to see why the Logan Paul vs Floyd Mayweather odds are where they are.

Looking at Mayweather’s odds history, you can see that he has been favored in each of his last 18 fights that we have lines for; twice, he was a favorite of -2000 or more. On that list, you can see the body of work that “Money” has run through, including Arturo Gatti, Oscar De La Hoya, Canelo Alvarez and Manny Pacquiao, to name just a few. Consider the threat each of those opponents posed to Mayweather and then consider that Paul’s lone professional fight came against another YouTube star, KSI.

Now, if you are a typical $50 to $100 bettor, placing a bet on Mayweather is just not worth your time since a $100 bet on Floyd to win would profit you a whopping $7.14. You’re best to hang on until closer to the fight when more Logan Paul vs Floyd Mayweather betting props will be opened such as the method of victory or the total number of rounds, where you will get much better value.

With this being a “super exhibition” bout, one problem for me is the question of what weight they will fight at. Because it’s an exhibition, perhaps there won’t be an official weight limit. Logan Paul weighed in at 189.6 pounds vs KSI while Mayweather struggles to get over the 150-pound mark.

Mayweather’s Conditioning is a Game Changer

However, regardless of the weight, Mayweather is a far superior athlete and boxer who is extremely difficult to hit and knows all the tricks of the trade to make you look foolish – and that’s exactly what he will do to Paul.

As mentioned above, a wager on Mayweather to win outright isn’t worth your time and I would have to see how many rounds they decide to go to give you direction on a method of victory. If they do 10 to 12 rounds, Floyd by knockout is the pick for sure, because Paul will tire and Mayweather will not. If it’s six to eight rounds, I’ll probably go with a win by decision.

What Does Paul Do Right?

I must say that in Paul’s two fights vs KSI (they fought once as amateurs), there were some things that he did well, specifically using his long jab to keep his opponent at bay. However, he gets excited when he does land a jab and then tends to wing wild overhand hooks afterward that rarely land. Also, due to this wild approach, his conditioning becomes an issue. If there are two things you can’t do against Mayweather, it’s throw sloppy punches or gas out.

Again, looking at the Logan Paul vs Floyd Mayweather odds, taking Mayweather at -1400 is not worth a wager, but betting on the fight to not go the distance at -260 has a lot more intrigue.