The era of Prohibition had lasting effects on societal norms regarding America’s bar culture. In the age of speakeasies (hidden, illegal nightclubs that served alcohol and entertainment), women were more welcome in bars than they were during previous times. At the same time, the popularity of jazz and blues music greatly expanded. When Prohibition ended, the new bar culture remained, setting the stage for Blues-infused juke joints and casino bars of Newport’s post-Prohibition Sin City era. 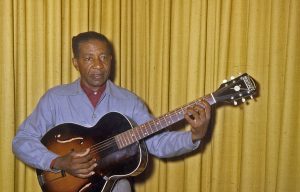 The casino bars and “juke joints” (blues nightclubs) of Newport were home to many great musicians of the Sin City era. Alonzo “Lonnie” Johnson (1899-1970), a highly influential blues musician whose electric guitar playing style was the forerunner of blues legend B.B. King, has been called “one of the greatest and most influential bluesmen of all time” (Steven C. Tracy, Going to Cincinnati: A History of the Blues in the Queen City, p. 136). In addition to his blues contributions, he collaborated with Louis Armstrong and Duke Ellington in 1927, recording several jazz songs with them. After more than twenty years as a published recording artist, Johnson moved to Greater Cincinnati after signing a record deal with Cincinnati-based King Records in 1947. Known for his many hit songs, including “Tomorrow Night” (1948) and “Confused” (1949), he regularly performed at the 333 Club (333 Central Avenue) in Newport during the time he lived in Cincinnati from 1949 to 1955. His song “Tomorrow Night” was so popular that it topped the American R&B charts for seven weeks straight in 1948 and has been re-released on over ten separate records, spanning multiple countries. Johnson was inducted into the Blues Hall of Fame posthumously in 1990. 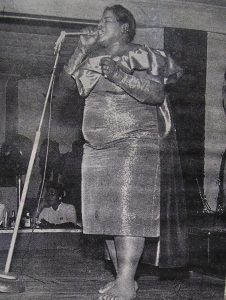 The Cincinnati Jug Band recorded the song “Newport Blues” for a single released by Chicago-based Paramount Records in January 1929. This song was also the first recording by vocalist Bob Cole under the name Bob Coleman, who had already released four songs under the name Kid Cole the previous year (1928) for Vocalion Records. It was also the band’s second published recording to be released, and was first advertised in the Pittsburgh Courier on April 20, 1929 and in the Chicago Defender on April 27, 1929. “Newport Blues” was about the nightlife of Newport, Kentucky, which, at the time was well-known as a hotbed for gambling, illegal drinking, prostitution, and a place where Cincinnati’s blues musicians performed for mobsters, gangsters, and music fans alike. The B-side song on the single was “George Street Stomp,” an ode to the red-light district of Cincinnati’s George Street.

The Cincinnati Jug Band is regarded as a paragon example of an authentic Blues jug band. They performed regularly in the red-light district of Cincinnati’s George Street, as well as African-American nightclubs and casino bars in the “Bottoms” district, Southgate Alley, and Central Avenue areas of Newport. The group was led by Bob and Walter Coleman, and recorded several singles which were released by Paramount Records during the 1920s and 1930s. These 78-rpm shellac records are regarded as some of the purest and rarest jug band recordings ever made, and the originals are highly prized by collectors to this day.

In a further connection to Newport, James “Pigmeat” Jarret, the piano player for the Cincinnati Jug Band, ran away from his home in Cincinnati and lived for several years in Newport, where he regularly snuck into the speakeasies, where “the bootleg liquor flowed and the dice would shake, rattle, and roll continually” (Tracy, p. 82).

But the wild nightlife of Southgate Alley wasn’t without its share of danger. Albert Washington, a blues vocalist known for the hit song “Haven’t Got a Friend,” had a dangerous run-in with mobster Frank “Screw” Andrews while he was just a child living in Newport. He and some of his underage friends snuck into one of Screw’s casino bars to play slot machines. Screw caught them and forced them outside into the alley, lined them up against a brick wall, then threatened to shoot them. 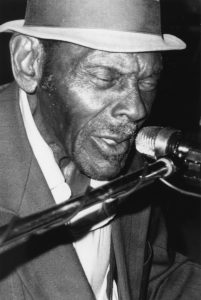 The nightlife of Newport was on the cutting edge of American culture during the years of Prohibition, the Great Depression, World War II, and the early years of the Cold War. While the economic and political climate of the United States proved at times rather grim, thousands of people nightly kicked up their heels, raised a glass, and rolled the dice in the clubs along the alleys and main thoroughfares of Newport. Blues and jazz reigned supreme. At home and at their places of work, Americans faced great new challenges, but for a few hours at least—in the smoke-filled clubs of Newport—they could forget their troubles and enjoy some of the best music in the region.

Steven C. Tracy, Going to Cincinnati: A History of the Blues in the Queen City (Urbana, IL: University of Illinois Press, 1993).

Chad Huggins Dunbar is a graduate of the MA in Public History Program at Northern Kentucky University (NKU). He resides in Louisville, Kentucky.

We want to learn more about the history of your business, church, school, or organization in our region (Cincinnati, Northern Kentucky, and along the Ohio River). If you would like to share your rich history with others, please contact the editor of “Our Rich History,” Paul A. Tenkotte, at [email protected] Paul A. Tenkotte, PhD is Professor of History at Northern Kentucky University (NKU) and the author of many books and articles.