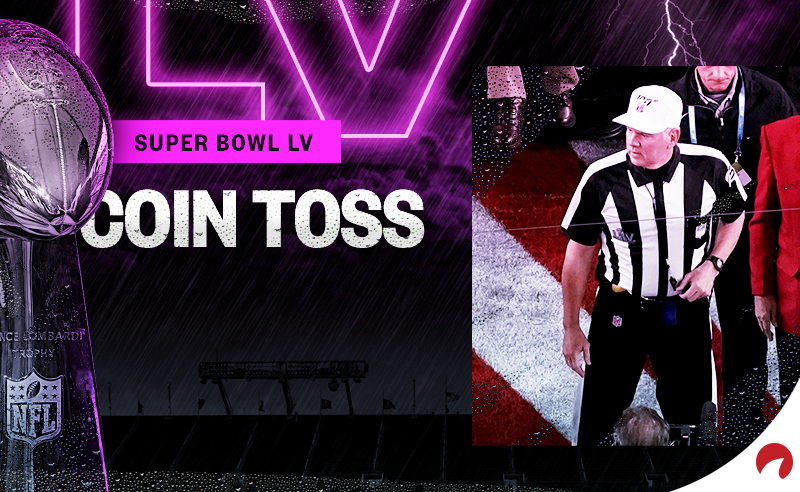 UPDATE: It was heads! Kansas City Chiefs win the toss and have deferred to the Tampa Bay Buccaneers in Super Bowl 55.

One of the best parts of the Super Bowl each year is the massive number of prop bets available for the average bettor. Niche props like the national anthem runtime or what color of Gatorade will be poured on the winning coach are fairly popular but the pregame coin toss is always a massive draw because there is no true edge.

Whether you’re a seasoned professional bettor or making your first visit to a sportsbook, no one can resist a legitimate 50-50 proposition bet like the coin toss that requires no true skill to pick the winner. It’s one of the few bets you can make with minimal effort and basic handicapping.

What Are Coin Toss Odds for Super Bowl 55?

Odds as of February 7 at BetUS

What Is A Coin Toss Prop Bet?

Short for proposition, a prop is a bet that doesn’t necessarily correlate with the final outcome of the game. The coin flip wager is considered more fun because it relies less on data and stats and more on chance.

You don’t have to check ATS standings or betting trends as you would with other sports betting options. Plus, teams that win the toss don’t always win the Super Bowl. For example, in Super Bowl 54, the San Francisco 49ers won the toss but lost the game to the Kansas City Chiefs.

While some NFL and Super Bowl bets require intense research, the coin toss yields one of two results, and the odds will reflect that. You either pick HEADS or TAILS. That’s it. There’s a 50-50 chance that the coin lands on what you picked. You don’t have to factor in an NFL player’s past performance or coaching decisions. You can, however, look at historical data – we’ll cover that below – to determine if you want to pick HEADS or TAILS.

There is no clear favorite for this bet since there is a 50-50 chance of winning for each side. If you put $25 on HEADS and that’s how the coin lands, you’d get a payout of $48.81 – your original $25 is returned along with your winnings of $23.81. The same wager on a winning TAILS bet would net you the exact same payout since the odds are identical. To know how much you’d win based on the odds and amount of money you bet, check out our Odds Calculator.

Jacob Bernoulli, a 17th-century Swiss mathematician, analyzed the statistics of random experiments with two possible outcomes. His Bernoulli trials became world-famous, mostly because there was nothing to do back then except math.

If Bernoulli were alive today, he would love football, since every game during the NFL regular season, playoffs and Super Bowl starts with a Bernoulli trial (coin toss).

Since the first Super Bowl, HEADS has come up 25 times and TAILS 29. The winner of the Super Bowl has won the coin toss 24 times with HEADS coming up 12 times (half). Bernoulli would consider this a success since it proves that the coin toss is random and won’t always land the same way for each game.

Does the Coin Toss Impact the Super Bowl?

The coin flip can have an impact on the game. Generally, teams that win the coin toss choose to receive the ball. When you receive the ball, you get the first scoring chance. Even if you don’t score a touchdown, you can still move the ball downfield enough to get into field-goal range and at least put three points on the board.

Unless, of course, the other team’s defense is that good and you can’t move the ball at all. This is possible considering it’s the Super Bowl and you don’t get there with a subpar defense. If you’re the underdog team, you want to win the toss and try to throw up some points on your opponent on your first drive to give yourself some padding.

Odds as of February 7 at BetOnline

Odds as of February 7 at BetOnline