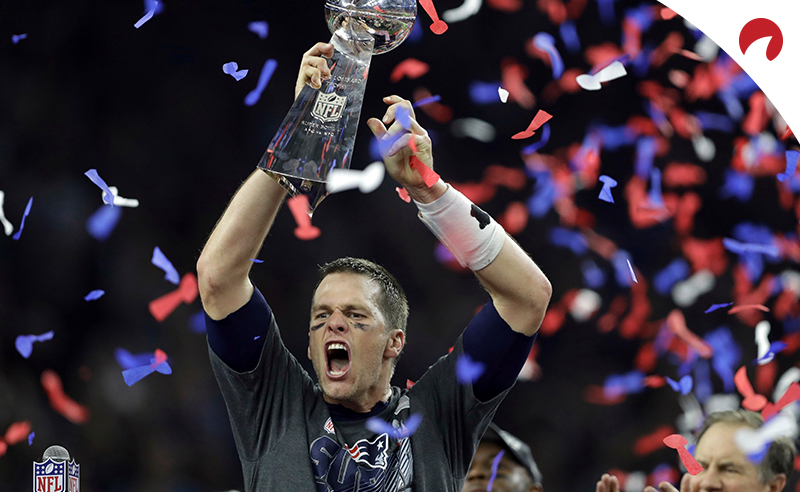 With the Tampa Bay Buccaneers’ victory over the Green Bay Packers in the NFC championship game, Tom Brady is now preparing for an absurd 10th Super Bowl appearance. That’s right, 18 percent of all Super Bowls have had Brady as one of the quarterbacks.

Of course, we already know that the California native has won six Super Bowl rings, but how did his teams fare against the spread, how’d the total go and how did Brady himself perform in those games? Well, I’m going to take a deeper look into all of the Tom Brady Super Bowl betting trends.

Online sportsbook Bovada has released its Super Bowl 55 odds and has listed the reigning champion Kansas City Chiefs as 3.5-point favorites over the Tampa Bay Buccaneers. The Chiefs are -170 on the moneyline and the total has been set at 56.5 points.

New to sports betting and looking for information on how to get started? Be sure to take a look at our great How to Bet NFL guide to help get you in on the action. Also, keep an eye on our NFL odds page for the latest, up-to-date Super Bowl odds.

Each of Brady’s previous nine appearances came as a member of the New England Patriots, but this year he will be representing the NFC as a Tampa Bay Buccaneer. Looking at Tom Brady’s Super Bowl betting history, his Patriots went 6-3 SU over those nine Super Bowl games, losing only to NFC East teams – the New York Giants (twice) and the Philadelphia Eagles.

In the six Super Bowl victories, New England had an average winning margin of 4.8 points with the largest win coming in the most recent championship, a 10-point triumph over the Los Angeles Rams (13-3) to conclude the 2018 season. The first three Super Bowl titles for Brady and the Pats all came courtesy of three-point margins.

Overall, the first Tom Brady Super Bowl betting trend is that he is 6-3 SU and 4-5 ATS. Furthermore, the Patriots were favored in seven of the nine Super Bowls, going 4-3 SU and 2-5 ATS as the favorite. In two games as a dog, Brady and the crew went 2-0 SU and ATS. Once again, the Bucs are underdogs to the Chiefs.

If you’re not a spread bettor, perhaps the total will be of more interest. There have been an abundance of points in the recent Brady Super Bowl appearances, with three of the last four resulting in a combined score of 50 or more points. However, Super Bowl 53 saw just 16 total points on the scoreboard.

The highest-scoring Super Bowl over Brady’s nine appearances was in the loss to Philadelphia at Super Bowl 52, a wild 41-33 affair for a total of 74 points. The following year brought the lowest-scoring, in the Pats-Rams matchup.

Overall, the average combined score in Brady’s nine Super Bowls is 46.2 points. That’s 10 points lower than the Super Bowl 55 total of 56.5, which represents the second-highest total Brady has had in his big game history.

With Brady no longer with the Patriots, you have a split among fans that could impact the way you place your bets for Super Bowl 55. Some may be solely New England fans and don’t want to bet on Tampa Bay, while others are just fans of Brady and want him to succeed.

Whatever your betting motivation, there are plenty of individual Super Bowl 55 props that you can bet on No. 12. Here are some Tom Brady Super Bowl betting trends specific to him that may help you handicap those options.

Online sportsbook BetOnline has a big list of Super Bowl 55 player props that you can wager on, and a popular one is OVER/UNDER passing yards for Brady. In his first Super Bowl appearance as a rookie in 2001 at Super Bowl 36, he threw for just 145 yards, the fewest he has had in any of the big games. Brady has thrown for less than 250 yards just one other time while topping the 300-yard mark four times.

In nine Super Bowls, Brady has thrown a total of 18 touchdown passes to six interceptions, averaging two scoring strikes per game while throwing three or more in just three games. So, while a plus-money option might be intriguing, it may not be your best bet.

Lastly, another Super Bowl 55 prop that you can play is pass completions. Going up against the Chiefs, Brady’s pass completion total is set at 24.5 with the OVER and UNDER both holding -114 odds. This may be a good opportunity to hop on an OVER as Brady has surpassed 25 completions in six of the previous nine Super Bowls, averaging 28.4.

Tom Brady and the Patriots also had four game-winning drives, scoring the last points of the game to take the lead and win the Super Bowl. Two of those drives resulted in touchdowns and two in field goals. So keep an eye on the odds for the Buccaneers if they are trailing in the fourth quarter because Brady may lead yet another late game-winning drive.